HomeBlogBlogWhy Do Turmeric And Black Pepper Need To Be Taken Together?

Why Do Turmeric And Black Pepper Need To Be Taken Together?

The History Of Turmeric

Turmeric has been used medicinally for thousands of years, and is widely used in Indian Ayurvedic medicine. Curcuminoids are the compounds in turmeric that give it it’s vibrant orange colour – with curcumin being the most active of these. Turmeric’s popularity as a supplement has spread world wide recently as more and more scientific studies reveal how incredibly powerful its effects are on the body. That’s the good news, the bad news is that curcumin has very low bioavailability – this means that it’s difficult for the body to absorb and use. When it’s combined with black pepper, however, studies have shown that it supercharges the absorption!

Regular consumption of a high level of turmeric has been linked to wide a range of health benefits:

Why Does The Body Not Absorb Curcumin Properly?

Curcumin dissolves in fat rather than in water, and due to the fact that our digestive systems are a watery environment, most of it just ends up being excreted by the body. Further to this it’s rapidly metabolised in the liver and intestinal walls, and therefore only a tiny portion of it enters the bloodstream. These factors result in low bioavailability, which means that only a very small amount of curcumin is available for the body to use. This is where black pepper comes in.

Black pepper contains a constituent called piperine, which acts in the liver and helps to slow the breakdown of curcumin, leaving more available for the body to use. Confirmed by several studies, the bioavailability of curcumin has been shown to be significantly higher when combined with piperine.

In fact, in one particular study in humans, it was observed that a dose of 2 gm curcumin with just 20 mg of piperine produced an astounding 2000% increase in bioavailability. Black pepper also has its own health benefits to offer – including enhancing digestion, regulating nerve signals, boosting metabolism, and controlling obesity. Studies also suggest that black pepper has antioxidant, anti-inflammatory, and antimicrobial properties just like turmeric.

Inflammation is a normal part of the healing process, for example if you hurt yourself the body will go into healing mode and part of that will include some inflammation. However chronic inflammation is a cycle that may lead to disease, for example asthma, allergies, diabetes, heart disease and even cancer. One of the key factors in reducing these disease processes is to decrease this pattern of chronic inflammation, and curcumin helps to do this by inhibiting powerful enzymes and molecules involved in the inflammatory process. Studies have shown that curcumin may also help to prevent more proliferative diseases by various mechanisms including:

Inhibiting mutations – cellular mutations may lead to abnormal cellular behaviour and even cancer
Detoxifying cacinogens – processing substances that are known to cause cancer, making them less toxic to us
Decreasing cell proliferation – lessens the spread of “unhealthy” cells
Inducing apoptosis of tumour cells – this means causing the death of “unhealthy” cells.

Human studies illustrating the anti-cancer effects of turmeric are promising, particularly on leukemia cells, gastric and colon cancer cells, and breast cancer cells. Studies also show that the incidence of cancer is recorded to be low in India compared to Western countries, where turmeric is used on a regular basis.

Can Turmeric Be Used For Pain Relief?

Due to its anti-inflammatory properties, turmeric has long been used in Indian Ayurvedic medicine to heal the body, fight infections, and relieve pain – many studies have shown the ability of curcumin to reduce pain, inflammation and stiffness, in both rheumatoid arthritis and osteoarthritis. Turmeric and black pepper together create an unbeatable combo for relief from chronic pain – piperine in black pepper activates cellular receptors (TRPV1) that set off an anti-pain reaction in the body which in turn brings about significant relief  even from nerve-related pain

What Else Can Turmeric / Curcumin Be Used For? 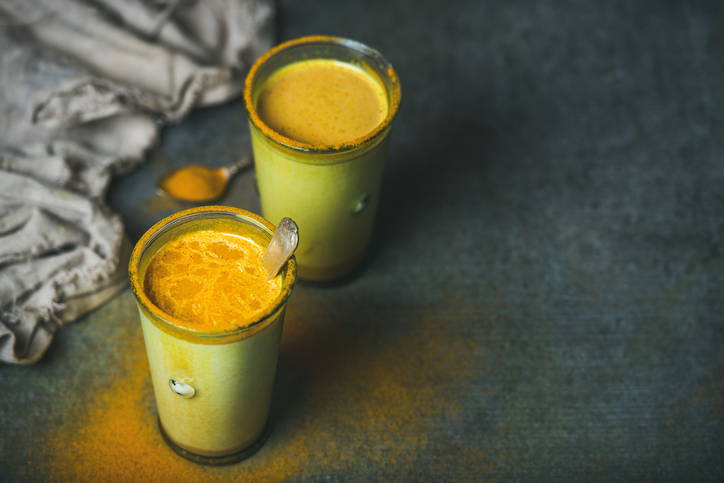 Interestingly India has a low incidence and prevalence of Alzheimer’s disease – while this may be attributed to genetics or an intake of specific foods, many people say its due to the daily intake of turmeric. It has been discovered that curcumin has the potential to cross the blood brain barrier, and then be able to have a positive influence on potential inflammation within the brain. This is showing exciting results in the treatment of mild cognitive impairment, stroke and hopefully may help in the prevention of degenerative cognitive diseases such as Alzheimer’s disease and Parkinson’s disease.

More and more research is building to support the use of curcumin in stress and mood disorders. The mechanisms of how curcumin may work in the brain, seem to be similar biologically to how many anti-depressants work. Depression is now considered by many to be a disorder of inflammation – an area we know curcumin excels in!

So far there has not been any toxicity shown for curcumin and turmeric – even at high/concentrated amounts it is extremely safe to consume. In fact, many studies have found that curcumin may have an even more potent effect than some drugs, and without any of the side effects. It is important to note however, that since curcumin has a positive effect on the gallbladder and stimulates the release of bile flow (to aid fat digestion) it may lead to an unsettling of the gallbladder. This is not good for those with gallstones therefore always ask for advice from your healthcare professional if you have any concerns.

There are so many incredible ways turmeric and curcumin can help the body, on many different levels and pathways, for a wide range of conditions. It really does seem that nature has provided us with a wonder herb, and while it has been revered for thousands of years, science is now helping to unlock its secrets.

Due to the bioavailability of curcumin, make sure to choose a turmeric supplement with black pepper in it to ensure maximum absorption and use within the body.